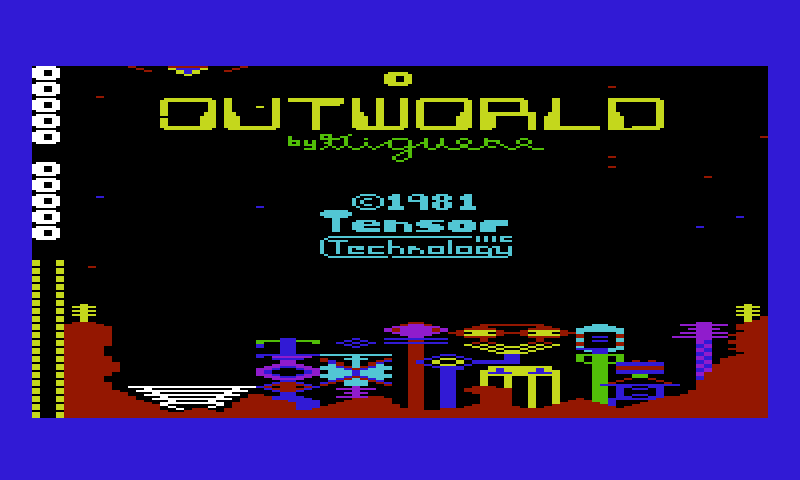 The game screen in Outworld depicts a city along the bottom of the screen with a fuel gauge along the left; above the city is an invisible force field which protects it from meteorites. As the game begins, a fuel ship replenishes the fuel and takes off. As meteorites approach the city, they will hit the force field and be destroyed using up some of the fuel in the process. The player controls a cursor for aiming and can fire shots to destroy the meteorites before they hit the shield. Firing also uses fuel (though less than a meteorite hitting the shield) so aiming carefully to avoid firing too many shots can become crucial. If the energy shield runs out of fuel, the player will no longer be able to fire and meteorites can reach the city and destroy it. In addition to the meteorites, there are also UFO’s that pass by. The UFO’s are equipped with bombs that can penetrate the shield; if the UFO succeeds in dropping a bomb, part of the city will be destroyed. Players will need to shoot down the UFO or the bomb it drops before the entire city is destroyed by them. The game ends when the entire city is either destroyed by the UFO or fuel runs out allowing meteorites to destroy all of the buildings.

Points are earned in Outworld by shooting the UFO’s and meteorites as follows:

Additionally, points are multiplied by a bonus multiplier depending on what level of the game the player has reached. The bonus for each level is as follows: