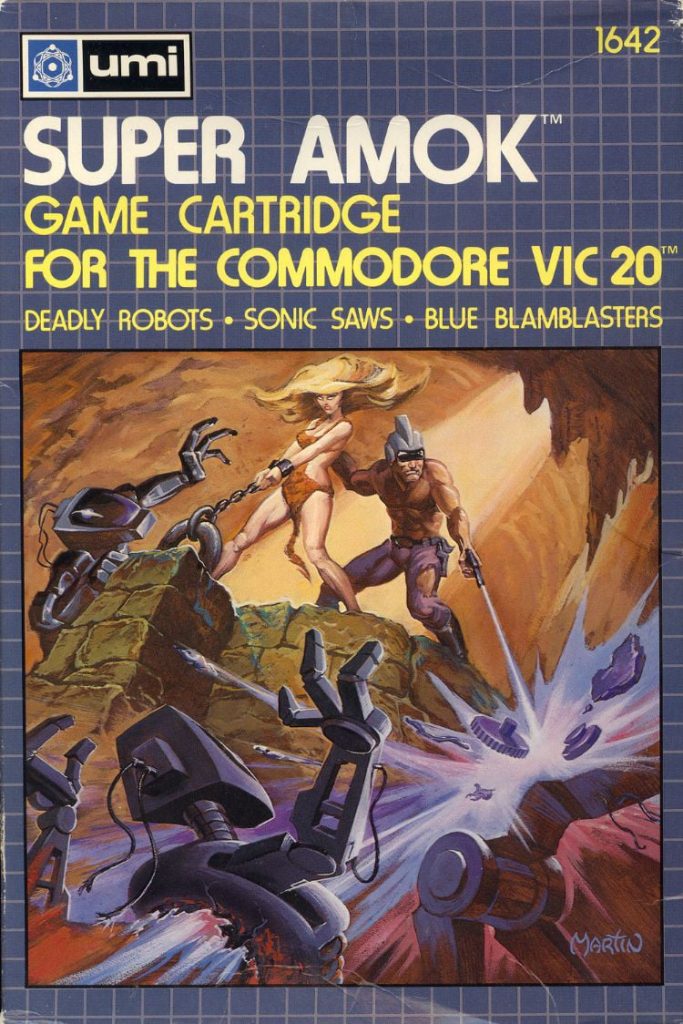 Super Amok for the Commodore VIC-20 Super Amok is an action game released for the Commodore VIC-20 in 1983 by UMI; it is the sequel to Amok and expands on the original with enhanced graphics, sound, and gameplay. Like it’s predecessor, Super Amok is essentially a clone of Berzerk; players control a human trapped in numerous maze-like rooms with the goal of destroy enemy robots run amok.

Gameplay in Super Amok takes place with a top down view of a simple maze; players control a humanoid that can run and fire in any direction. The goal of the game is to earn as many points as possible by destroying the deadly robots found in the maze. Points are earned for each robot shot; players lose a life in the game if they are shot by or touch a robot, or run into any of the maze walls. Each outer wall in the maze has a door on it which leads to another room; it’s not necessary to clear a room before leaving, however bonus points are awarded if all robots are destroyed first. When players first enter a room, the door the entered through is temporarily blocked off preventing players from immediately exiting via the same path they entered.

While the original Amok had no equivalent to Berzerk’s Evil Otto, Super Amok does have something similar; if players are in a particular room for too long, a number of fast moving robots will suddenly appear (some types appear from one of the doors, others appear right in the middle of the playfield). Unlike Evil Otto, these robots can be destroyed, however this is more difficult than with normal robots due to their fast, erratic movements. The game includes multiple skill levels which affect the overall game speed and the aggressiveness of enemy robots and can be played by one or two players.