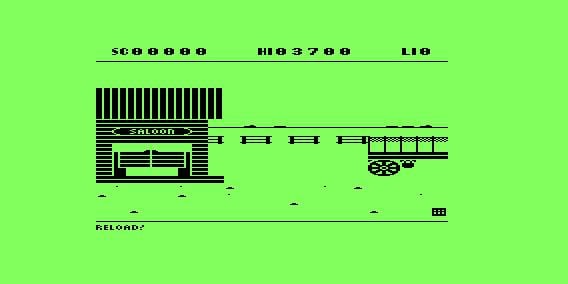 Interface: Joystick only Game type: First person shooter (Ha ha well technically it is)Written by: W E de Villiers Copyright: 2021 eXimietas SoftwareSioux City Showdown is a FPS in the tradition of Duck Shoot. You want a backstory? Well ok, you play the part of Clay Sherman, a law man in the old West.

The Barker gang has come town (Sioux City) and are aiming to send you to boot hill. Why? Well all because of your brother see. During the American Civil war you and your brother ended up on different sides of the War. Not only that but your sibling ended up mixing with the wrong crowd. After the War he joined a gang and you joined up with the law. Anyway he crossed the gang leader Colonel Barker and got himself killed. You got the news of his death when you recieved his two six shooters by express and a teary note from a Miss. Penelopy Smith explaining his unfortunate demise. Now the Barker gang is in town and its unclear who is looking for whom. All that can be said for sure is that its going to be bloody day in Sioux City.

Note: According to my limited research on the subject there were never any massive gunfights of note in Sioux City. I just like the name.

Notice: This software is distributed as is without any warranty given or implied. You can copy the software for personal use. The source code remains the copyright of E W de Villiers and eXimietas software and all rights are reserved.